The Japanese abacus and the brain 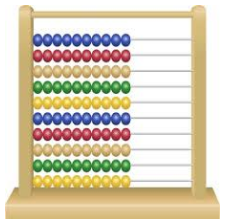 My grandson introduced me to the Japanese Abacus or Soroban in 2015 and I was completely blown away. Here’s how it works and what it does for your, or your child’s, brain.

The abacus in its original form appears (Wikipedia) to date from as far back as 2700 – 2300 BC. It has gone through various stages and remains in Russia in the form that most of us are familiar with where there are 10 beads per rail for decimal counting (all images copied from Google) – 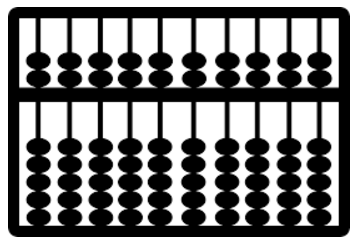 And then the Japanese (of course!) realised that two of the Chinese beads are redundant –

which gives us the Soroban. Beads 1 through 4 and a separate 5 bead on each rail. The beads count when they are moved against the central rail. So you count 1,2,3 and 4 by moving the lower beads on the righthand rail upwards, the 5 by moving the lower beads down, away from the rail and the 5 bead down to the rail. Then 6,7,8 and 9 by moving the lower beads up again. To count 10, you clear the right hand rail and move one bead up on the next rail. The Soroban illustrated can count to 9 999 999 999 999. Addition and subtraction are pretty logical, you simply add more beads or take them away, but would you believe that this thing can be used to multiply and divide? I just tested myself with 8 964 x 423 = 3 791 772. Division is easy as long as you know your times tables up to 9.

I had the priviledge of attending training with AbacusMaths prior to our introducing the teaching to our school. The truly amazing step is to imagine the abacus in your head and do the bead movement in your imagination. It looks a bit silly in public, because you move your fingers as if moving the beads as this helps with the visualisation. The technique, called Anzan (pronounced Unzun), is what abacus maths is really all about and the kids (and I) start it from the get-go. It develops the right brain (pictures and creativity) equally with the left brain (logic) and that is really powerful. And for us oldies, I really believe that it helps rebuild the neuron connectors in the brain. During a heavy training session at AbacusMaths, I felt as if my brain had gone through a washing machine and tumble drier before being hung out to dry!