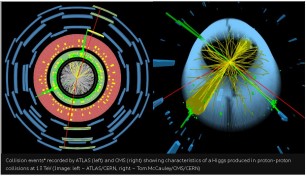 There’s a mystery that I just cannot get my head around. What exactly is mathematics?

Some would say it is a language. Yes, I would agree with that, but there’s more to it than that.

My problem stems from my passion for quantum physics and the mysteries of the universe. You may or may not know that in Einstein’s time there were two principal branches of physics, the big picture that Einstein so eloquently described (it dealt with the sky at night, gravity, time, mass and energy) and the small picture, generally known as quantum physics (which deals with elementary particles like quarks, bosons, antimatter and other unimaginably small particles that may only have existed moments after the Big Bang).

Einstein and others searched and have been searching ever since for one combined theory that unites the big and small pictures into a theory of everything. Part of this search involves finding different solutions to Einstein’s mathematical formulae and this is where my mystery starts.

I’ll give you an example. Back in October 2013, the Nobel prize for physics was awarded jointly to Francois Enlert and Peter Higgs “for the theoretical discovery of a mechanism that contributes to our understanding of the origin of mass of subatomic particles”. They had previously predicted, mathematically, the existence of a particle which became known as the Higg’s boson. Now, when they predicted it, nobody had ever observed this particle – it needed a collider of higher energy than existed at the time to produce it from colliding particles, but its existence was necessary for the solution of mathematical equations which were being developed towards the theory of everything. In 2012 the Higgs boson was observed by the Large Hadron Collider at CERN, the massive underground facility that straddles the border between France and Switzerland and accelerates particles in opposite directions around a 27km circle before colliding them. It has since been observed many times at CERN and its existence, albeit for extremely brief moments, is proved conclusively. (Pictures are from CERN website). 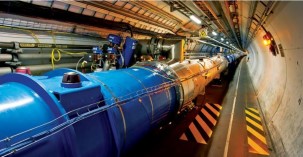 Now I must repeat myself. Its existence was predicted only because it was necessary for the solution of a mathematical equation.

Another example. The current equations can only be solved if there are eleven, not three, dimensions. We only observe three dimensions, forward and backward, up and down and left and right. There have to be eight more to solve the equations. Where are they? Again, to solve the equations, they have to be rolled up in infinitesimally small spaces permeating our three dimensional universe. Mathematical equations require this to be the case and I have no doubt that sometime in the future, this will prove to be true.

So what is this thing called mathematics?

By the way, if this interests you, add Cern to your Instagram. The pictures are truly amazing.