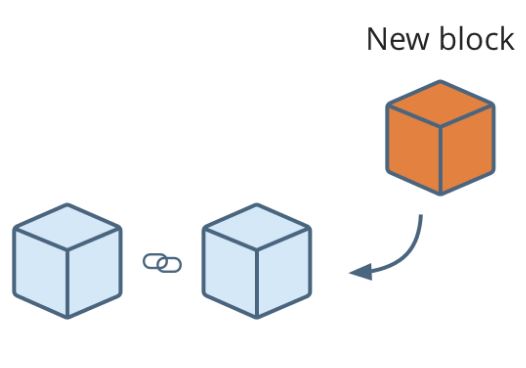 You hear about Bitcoin, then you must also hear the word blockchain. Ever wonder what the heck it is?

I like to think of it as a new Internet of events. The events are the blocks and the sequence is the chain. Hence blockchain. It was adapted by Satoshi Nakamoto, the unidentified person or group of people who enhanced it for Bitcoin. Let’s take a simple example –

On 12 July 2008 at 13h07, Jane buys an oil painting, “Life in the Roses” from Bob and pays with her cryptocurrency. That event will ultimately form a block.

On 28 September 2012 at 15h38, Jane sells “Life in the roses” to Sally who pays with her cryptocurrency. That event will also ultimately form a block.

When the two blocks are irrevocably linked, they form a chain. Each block in the chain has a hash code which looks something like this* –

It also carries the hash of the previous block, so that they are irrevocably linked in a fixed sequence. So what’s so special about that? Nothing yet, but now let’s dig a little deeper.

Jane has her own heavily encrypted “signature” and so do Bob and Sally.

Jane and Bob “meet” on a blockchain platform, identify themselves, as their keys, or encrypted signatures (only), and conclude the first transaction. Now here’s the clever bit. A computer now has to solve a cryptographic puzzle. The solution, or proof-of-work is then shared with the rest of the computers. The network verifies the proof-of-work and the block placed at the beginning of the chain.

Later, Jane and Sally “meet” on the same blockchain platform, identify themselves as their keys, and conclude the second transaction. A computer now has to solve another cryptographic puzzle (it takes about 10 minutes). The solution, or proof-of-work is shared with the rest of the computers. The network verifies the proof-of-work and the block is added to the chain.

Perhaps the most difficult part of the whole concept is the PoW or proof of work requirement. What is it and why is it necessary? Simplistically, it is the unknown number that solves a cryptograph. The only way to find it is to try all numbers. This takes about 10 computer minutes. However, once found it is easy for another computer to verify the solution, by simply plugging in the solution. It is necessary because the network is distributed across many computers in the entire network and if a second transaction reaches one of them before the first, it must be possible to determine its validity. Because the cryptograph and its solution are attached to a block before it is distributed to the network, all receiving computers can verify the solution, then add the block to the chain. This prevents Jane, for instance, spending the same cryptocurrency twice as the second transaction will not generate a cryptograph (presuming she has no more cryptocurrency available to spend) and cannot therefore be verified by all the computers in the network.

If anyone tried to change a block, the hash would change and would not be matched by that in the following block, so they would have to change the hashes of all subsequent blocks in all the computers carrying the chain, and they would have to recalculate the PoW for every block and again distribute it to every computer on the network. Not happening!

It is important to note that the chain is not in any one place, it is on all the computers that participate in that blockchain network. Some chains are public (accessible to anyone), some are private (accessible to a closed group) and some hybrid (some information in the blocks is public and some private). No block, once added to the chain can ever be altered, partly because it is heavily encrypted, no key(s) will permit anyone to modify it (not even Bob, Jane, and Sally) and partly because it is so widely duplicated. It is this permanence that makes blockchain so powerful. It is an indisputable record of transactions between people, who could be on separate continents and unknown to each other. There are no intermediaries, just the transactions.