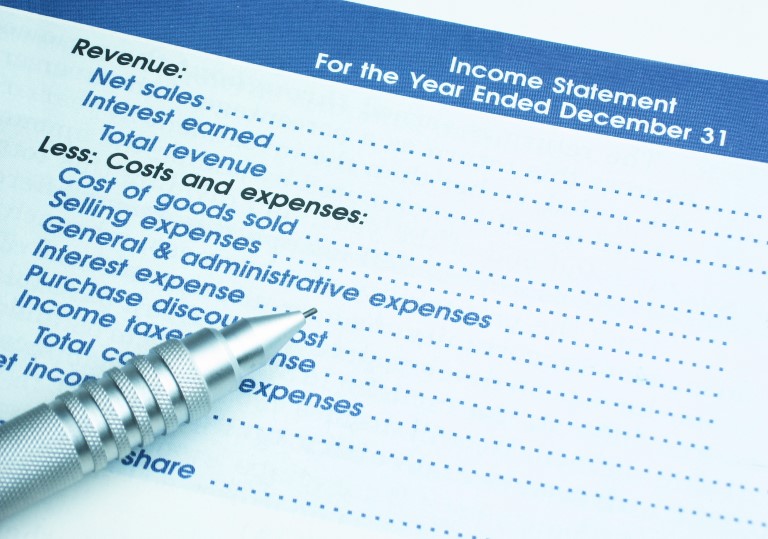 The easy one to understand is the Income Statement. This starts at the top with your sales, or what you like to call your sales. Me? I don’t think you’ve made a sale until the money is in the bank! But more of that later.

Then there might be an item called Cost of Sales, or Cost of Goods Sold. This is the total of all of the direct costs incorporated in the thing that you sold, so it would include, for instance, raw materials, transport of stock into your stores, consumables like paint, packaging, etc. Cost of Sales is then deducted from sales and the result is called Gross Profit. In a nutshell, this is the difference between what your stuff cost and what you sold it for, your markup, in other words.

So you bought something, marked it up and then sold it, but you had other costs that were necessary in order to do that business. These would include bank charges, telephone, internet, insurance, petrol, maintenance etc. They are called Operating Expenses and are listed below the Gross Profit. Then they are added up and the total is deducted from the Gross Profit to give the Operating Profit.

But maybe you had to borrow money to keep this lot going. You are charged interest, but this is not really an operating cost, because if you didn’t need to borrow, the show would still go on. It is shown below the Operating Expenses as Finance Costs. Take that off and you have the Net Profit Before Tax.

Your company is taxed at 28% of that figure. So, after deducting that tax, you’ll see the Net Profit After Tax. The tax won’t always be 28% at first sight, because some adjustments often have to be made in a tax calculation. That’s not a part of the Income Statement, in fact the whole tax issue is usually dealt with, not by your bookkeeper, but by your accountant. He or she does it just before your tax return is submitted. Now let’s go to the Balance Sheet.

Although the Balance Sheet (also known as the Statement of Financial Position, if you want to be posh) starts with the Assets, I want to start with the Liabilities, because this (and Retained Profit) is where the money came from. Examples are Long Term Liabilities (borrowings) such as Mortgage Bonds, Finance Leases etc., which don’t have to be repaid within the coming 12 months. Then there are Current Liabilities (borrowings), such as bank overdraft, trade creditors, SARS, which are payable within the coming 12 months. So you borrowed, or owe the money. What did you do with it? You acquired assets.

There are Fixed Assets, like vehicles, computers, buildings, which are not going to be traded, but which are necessary as the structure from which trade can take place. And there are Current Assets, such as Stock (Inventory for the posh), Trade Debtors (money owed to you by customers – you effectively lent it to them), cash at the bank or in the petty cash box.

And, because all of the money that you got from somewhere must have gone somewhere (even if only to sit in the bank), the Balance Sheet must balance.

And now a quick mention of Debits and Credits. The Debits are where the money went (expenses, tax, debtors, vehicles, stash in the bank, losses) and the Credits are where it came from (sales, borrowings, profits). Now isn’t that easy?